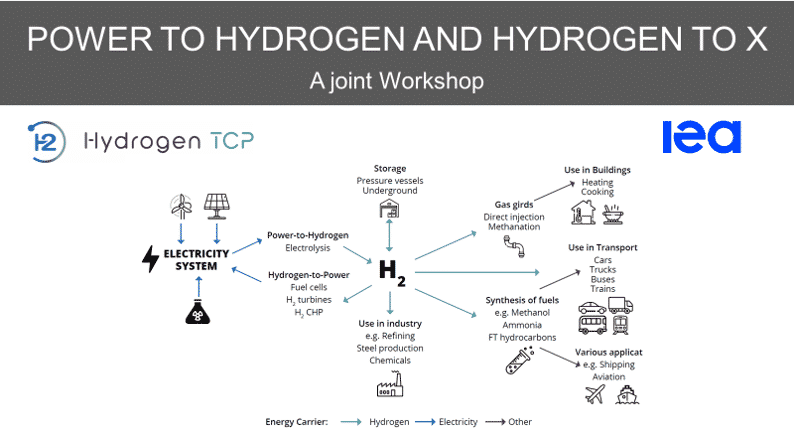 The event started with some opening words by Timur Gül, Head of the Energy Technology Policy Division at the IEA. He emphasized the importance of hydrogen in the decarbonization efforts and its great role in the future energy system.

Hydrogen as the pathway for the integration of cheap, renewable electricity into the power sector and its further use for multiple applications, as well as a solution for decarbonizing the energy sector and reaching net-zero emissions in the following decades are the two main focuses for policymakers in the field, according to Mr Gül.

After an overview of the IEA’s main works on hydrogen and remarking the importance of IEA’s collaboration with the Hydrogen TCP, Mr Gül thanked Paul Lucchese, Chair of the Hydrogen TCP, for his efforts, and expressed his desire for further synergies.

The next intervention, by Paul Lucchese, consisted of an overview of Task 38 on PtH and HtX, including the Task’s objectives, partners, internal structure, and main outcomes. Mr Lucchese presented some of the most relevant findings by each Subtask, all contained in the Final Report, available here.  The presentation finished with perspectives for further steps, including collaboration both within the Hydrogen TCP and with external working groups. More details can be found in the presentation available below.

Then, a roundtable with different Task 38 experts and Subtask leaders was introduced by moderator and master of ceremonies Marina Holgado, Hydrogen TCP Technical Secretariat Coordinator.  Jonathan Leaver, from UNITEC, started by going through some policy-related matters such as National Hydrogen Strategies, regulation, and standardization, and kept on with some of the specific needs for the sector according to the final uses of hydrogen.

He was followed by Joris Proost, from UCLouvain, who addressed PtX from two different perspectives: production (differences between green and blue hydrogen) and use (sectors in which hydrogen can be employed). Presentations by Mr Leaver and Mr Proost can be found below.

Sheila Samsatli, from the University of Bath, continued by giving her opinion on the hydrogen application that needs more R&D focus in the next years. According to her, hard-to-abate, energy-intensive industries -such as the production of steel, concrete, and plastic- (which are 22% of the global CO2 emissions) require specific investment and need to be prioritized.  For the sake of her argument, she explained that using 1 ton of H2 to produce steel will abate 26 tons of CO2, whereas using the same amount of H2 for mobility only abates 6 or 7 tons of CO2.

Robert Dickinson, from Hydricity Systems, fully agreed with Ms Samsatli regarding the sector’s priorities. Mr Dickinson also commented on hydrogen’s potential in balancing generation and demand in the electricity grid. More information on this can be found in Mr Dickinson presentation below.

When participants were asked by Ms Holgado about the highlights of participating in the Hydrogen TCP and, particularly in Task 38, they emphasized the exchange of knowledge all around the world, giving their day-to-day work a broader- global perspective, having meetings with hydrogen experts that are now life-long collaborators, and -when possible- travelling to other countries and visiting facilities around the world. Ms Holgado encouraged the attendees to check out the Tasks in definition and think about joining those of their field of expertise. 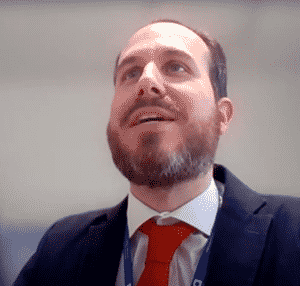 After a quick round of Q&A, where some clarifications of the previous presentations were made, José Bermúdez, IEA, Energy Analyst, gave a presentation on the role of P-t-H and P-t-X in the energy system. Mr Bermúdez went over how hydrogen can help to reach net-zero emissions targets, and specifically, with renewable hydrogen; to do so a much faster deployment of electrolysis capacity is needed. Large-scale deployment of these technologies would make renewable hydrogen production costs competitive with hydrogen from fossil fuels with CCS. More details can be found in the presentation available below.

Paul Lucchese then presented a new, recently launched Task 38 document: the Roadmap and recommendations on PtX projects. The roadmap analyzes demonstration projects on PtX from the past years and gives some guidelines on what needs to be done in the upcoming years. Mr Lucchese went over some general considerations, results of the analysis contained in the document, key messages, recommendations, and guidelines to stakeholders. The Roadmap is already available on the website, find it here.

The last presentation by Mr Bermúdez and Ms Holgado consisted of an overview of the planned strategic activities both by the IEA and the Hydrogen TCP on Power to X (available below).

During the second round of Q&A, the Hydrogen TCP’s Chair emphasized three main levels for needed public support: demonstration projects have proven that there is low TRL on innovative technologies such as high-temperature electrolysis, all value-chain projects integrated into the complex ecosystem – typically 100-200 MW-, and incentive mechanisms to compensate the gap between production costs for RES compared to the market price for massive production.

Mr Lucchese concluded the session by acknowledging the efforts made by all parties involved in Task 38 and by setting the basis for further collaborative research on Power to Hydrogen.

This event was recorded, you can find the video here.

We use cookies on our website to give you the most relevant experience by remembering your preferences and repeat visits. By clicking “Accept”, you consent to the use of ALL the cookies.
Cookie settingsACCEPT
Manage consent

This website uses cookies to improve your experience while you navigate through the website. Out of these, the cookies that are categorized as necessary are stored on your browser as they are essential for the working of basic functionalities of the website. We also use third-party cookies that help us analyze and understand how you use this website. These cookies will be stored in your browser only with your consent. You also have the option to opt-out of these cookies. But opting out of some of these cookies may affect your browsing experience.
Necessary Always Enabled

Any cookies that may not be particularly necessary for the website to function and is used specifically to collect user personal data via analytics, ads, other embedded contents are termed as non-necessary cookies. It is mandatory to procure user consent prior to running these cookies on your website.