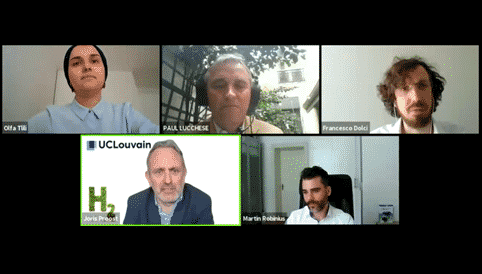 Last Tuesday, 8th of April the Hydrogen TCP’s Plenary Session at the IAEE 2021 Conference took place. The session started with a few opening words by the Hydrogen TCP’s Chair, Paul Lucchese. He explained the reasons that led them to start a new Task on Power-to-Hydrogen and Hydrogen-to-X in the framework of the Hydrogen TCP, aiming to study the increasing number of demonstration projects on PtX technologies, analysing the trends and the gaps.

After the introduction, Mr Lucchese gave the floor to Olfa Tlili, former Task 38 Manager. She gave an overview of the Task structure and participants, followed by a summary of the main results and findings derived from four years of research.

Starting with the Task objectives and structure (divided into several Subtasks and Task Forces), Ms Tlili went over the main deliverables: a Final Report and a Roadmap meant to analyze what is missing from the current Power-to-X demonstration projects and what needs to be done, as well as several papers, technology briefs, and presentations at conferences. 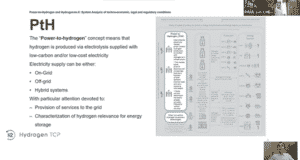 She then addressed each Subtask’s main results.  After a question made by an attendee, she further explained that the criteria to analyze the selected case studies was based on the regional differences and the availability of data. Experts had to adapt to the specifications of each country to analyze the challenges in terms of a regulatory framework and techno-economic aspects such as the projects’ economic viability.

It was then the turn for Mr Francesco Dolci, leader of Subtask 3b on “Review of the existing legal context and policy measures”, who started by talking about how “more and more countries are pushing forward policy action impacting hydrogen technologies”. He explained the main action points of the Subtask and how it focused on both incentives and legal barriers.

As main conclusions, he stated that the major legislative actions should include lower entry barriers, especially for hard-to-abate sectors such as industry and heavy transport;

and the overall promotion of production and use of green hydrogen. There are obviously differences among countries in terms of regulation since it is part of national political strategies. Some countries that count on more natural resources and would like to become hubs for potential hydrogen market are focused on production, while others are more interested in uses.

The third participant of the plenary session was Mr Benoit Decourt, Vice-President Hydrogène at Falkor, who talked from the point of view of an investor. He emphasized the need for projects to be de-risked. Beyond public funding, the main risk for demonstration projects is regulation. Clear and stable rules are needed to find the early investment that is required to start a project.

Finally, a brief roundtable moderated by Paul Lucchese took place with the collaboration of Task 38 participants Olfa Tlili, Joris Proost and Martin Robinius. They agreed that although we are entering now an “implementation period” in contrast to the “demonstration period” that we are leaving behind, there is still a need for demonstration projects as there is room for R&D improvement on hydrogen technologies, but they must be very targeted to test specific processes or materials. It is also extremely important that demo projects make available their main conclusions, lessons learned, challenges faced… to facilitate knowledge transfer and for future Project Managers to learn from what has already been done.

The session ended by acknowledging all Task 38 participants dedication and thanking the Conference organizers for the invitation.

For further information on Task 38’s work and Power-to-Hydrogen, you may attend the Joint workshop with the IAE planned for July 1st, 12:00-14:00 CEST. More information and registration form in our calendar.

We use cookies on our website to give you the most relevant experience by remembering your preferences and repeat visits. By clicking “Accept”, you consent to the use of ALL the cookies.
Cookie settingsACCEPT
Manage consent

This website uses cookies to improve your experience while you navigate through the website. Out of these, the cookies that are categorized as necessary are stored on your browser as they are essential for the working of basic functionalities of the website. We also use third-party cookies that help us analyze and understand how you use this website. These cookies will be stored in your browser only with your consent. You also have the option to opt-out of these cookies. But opting out of some of these cookies may affect your browsing experience.
Necessary Always Enabled

Any cookies that may not be particularly necessary for the website to function and is used specifically to collect user personal data via analytics, ads, other embedded contents are termed as non-necessary cookies. It is mandatory to procure user consent prior to running these cookies on your website.